Writing with a migraine is like writing with a big rock on your face, while someone stabs you in the eyes – repeatedly with a dull knife. 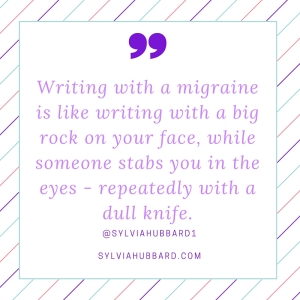 But that’s no excuse not to write.

I wanted to and carried around my notes with annoyance for days trying to just get enough energy to weave through the pain and put words down on paper.

Or press the keys and types.

But I did it and hopefully, I can keep it going.

There was an article by a skin doctor, which spoke about how male reproductive fluid was often used in expensive skin creams and promoted healthy collagen when applied to the skin. Women swore by the various creams the doctor touted.

Madison knew there would be no way she could afford those elixirs for her face.

She could always find a guy. This thought left her as soon as it came. That would be stupid and very unsafe.

Madison was innocent, but not stupid.

The following morning, she was even quieter to get out of the door, praying she wouldn’t run into Hazel, her father, or even one of her siblings. Getting to the bus stop, Madison looked eagerly around for the Lincoln, but to her disappointment didn’t see anyone.

It was sad the stranger in the Lincoln was the only thing she had to look forward to in her life.

Rushing out the house very quietly went on for a week, and she decided Nikki was right. She was foolish to hope to see this guy again.

As for her father’s secrets and the high possibility he took the money that could have saved her mother, she pushed that to the back of her mind, erasing her computer history just in case her father tried to see what she’d been looking at.

To get her mind off everything, Madison threw herself into studying and nothing else.

The following Sunday, her father suddenly came up to the attic. With each step he took, her heart slowed with dread. He usually tried his best to avoid her, while his new wife just gave Madison dirty looks but hardly said anything to her.

Madison was startled to see her father, who looked around her small room as if he didn’t know where he was.

When she had moved in, he’d told her she could have the attic, but when she went up there, no one had touched the place in years. It had taken three months to clean a corner, get a makeshift room together, and just be able to call it her living quarters. A previous owner of the house had used it to rent out and added a guest bathroom, so she didn’t have to leave the attic to get anything else in the house, except for food.

“I was getting ready for church,” she explained, when he looked disapprovingly at her in just a slip.

Her father was already dressed in a black polyester suit. “I’m not here about that, but we’re leaving soon. I just thought you should know with the added expense of you living here, Hazel sees there’s a need for more income in the home.” He paused as if she had said something to upset him. He harshly cleared his voice and straightened his tie. “I know you’ve got a full load at school, but taking you on is a big expense for the extra food and utilities, and we need some help. Alice is still in high school and, this being her last year, I’ve realized we got a lot of bills about to come in. Just something part-time should cover the extra expenses.”

She didn’t know what to say. With two of her scholarships, Madison was doing internships, and with a full workload at school, she was worried a job would get in the way of everything–including her doctorate project.

Did he realize what he was asking?!

“No disrespect, sir, but it’s going to be real hard to get something that’s going to work around my full school schedule,” she explained.

Cyrus stiffened. “Well, maybe you should think about taking a couple years off. Save up until you can afford everything, and then return to school.”

Madison was horrified at his selfishness. She could lose her scholarship! Stop her education? Was he crazy?

Cyrus cleared his throat impatiently, straightened his tie, and walked out.

End of discussion–on his part.

No way to avoid the inevitable.

Madison sunk to her bed, wanting to cry. What was she going to do?

When Madison returned home from church, it was too late for her to do anything. Her father literally stayed all day at church, and by the time she got home, she barely had enough energy to get her homework done, do a little work on her research, and then go to bed.

So exhausted from worry, Madison slept restlessly and woke up late. Barely stuffing herself in her clothes and grabbed her hoodie, she burst out of the house in full dash mode. She hadn’t even combed her hair and was glad the hoodie hung low so people wouldn’t see what a hot mess she was before at least could use her fingers like a comb to do something her bed head.

Running to the bus stop, she missed the first bus and groaned, knowing she was going to have to wait for the second one.

“Psst,” someone hissed behind her.

She looked and gasped at the Lincoln, which was parked perpendicular on the side of the abandoned buildings. Turning around quickly, she pretended she hadn’t heard a thing.

In the past, Nikki told her Detroit was strange and to be careful.

Madison tried to fight not looking, but being able to see the driver close up was what she had longed for.

Her curiosity won out. She turned to him and took in his features as she warily walked up to the car.

He was handsome. Too handsome.

“I shouldn’t talk to strangers,” she said sternly.

The stranger cajoled, reaching out to touch her sleeve innocently. “What’s the harm in talking?” His hand moved down to her hand and rubbed on her knuckles.

He was touching her. Were his eyes bad? She wondered. She looked down at her hand where his fingers rubbed against her fingers. “N-No, harm, I guess.”

“How old are you?” he inquired.

Looking back at his face, she answered. “Twenty-eight. Umm, my birthday’s coming up next week.”

She didn’t know why she told him this, but she hadn’t told anyone about her birthday coming up, and rambling through her nervousness with a cute guy looking at her so closely made her less anxious.

He licked his thick bottom lip slowly. “Really?” he sounded fascinated by that information. “You on your way to school or work?”

Too nervous to talk, she only nodded.

He chuckled. It was a sensual sound that made her ear drums tingle. “Which one, little girl?”

He gently started to massage her hand. His touch felt like warm electricity. “I could give you a ride,” he offered.

What do you have to say? Cancel reply