I’ve listened to your voices sense and changed the cover. Yes, it’s not as pretty, but…  It’s darker, but this is an intermittent book between the bigger books (King’s Paradise & Stealing Innocence III:Lethal Heart)

Plus, it better represents the female character shade. Yes, you were right. I’m not afraid to admit I was wrong and thank you so much for the correction.

This book is more for the readers than for anything. The ones that have been following the Heart family and need to know…

It’s only available for pre-order through Smashwords and Barnes and Nobles. I haven’t seen it distributed anywhere else yet.

(If you see it in your eBook store, please put the link in the comments.)

I just uploaded the cover so give it a chance to cycle through to all channels.

I honestly know a lot of readers won’t grasp Emperor’s Addiction until they’ve at least read SOME of the Heart of Detroit Series, which is why I’ve connected this book to them.

So if you try not to get confused here’s the scenario:

Emperor’s Addiction will be broken up into two books. The second will be called Emperor’s Heart.

Currently the line has:

READY TO PRE-ORDER? (see below for more information) 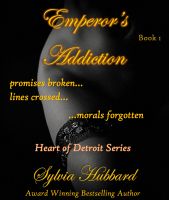 Promises broken, lines crossed, morals forgotten… Book One in the life of the notorious Emperor Heart.

Despite his family, Emperor Heart considers himself one of the most normal Hearts, even though he has four problems:

2) He’s addiction assuages the constant pain in his back from an old injury. Despite his family, Emperor Heart considers himself one of the most normal Hearts, even though he has four problems:

3) After catching his teenage daughter in a hotel with a boy, he promises her to stay celibate as long as she stays celibate.

4) He was doing fine until he meets his daughter’s mysterious friend and his libido runs a muck.

What’s a man to do, when his daughter’s friend shows up at his place alone and all he has is a towel to cover himself?

Yet, just as his lust grows uncontrollable and he tries to look but don’t touch, he can’t help feeling her life is in jeopardy and the more he acts upon his burgeoning desire, the more he may be endangering her life.

Book One into Emperor Heart’s delves into the lives of a family where their love, could be murder.

Pre-release—this book will be available for purchase October 2, 2013

Now the question I get asked the most, will this be available for Amazon?

Yes, but not until Oct 2nd. They won’t let me set up pre-order. You could complain, but I wouldn’t know to whom. LOL

By the way, Cabin Fever is associated w/Secrets, Lies & family Ties, which will be available free at Amazon.com from Sept 25th to 28th. Download and share!