This part of the story is no longer available in this blog post. You must go to : https://www.smashwords.com/books/view/266151 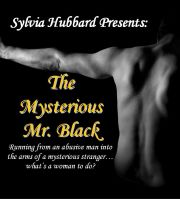 Running from an abusive man into the arms of the dangerous mysterious stranger… what’s a woman to do?

Jen is having a very bad life with nowhere to go but up. Fate brings a mysterious stranger to her, yet she can’t figure out if he’s for the good or the worse.

In one night of meeting The Mysterious Mr. Black, Jen finds her life turned upside down and she knows in order to solve the mysterious, she is going to have to go where no other woman has ever gone before, inside his head and his heart.

Will her journey to the truth, be worth the toil or will she end up dead?

How to download ebooks to e-reading devices and apps.

“You don’t look the least happy to see me, Jen.” He pulled out her wedding ring and held it up. “I think you’re missing something.”

Jen stared in terror and gasped again at the pressure of the knife on her skin. The jagged edge was cutting more into her clothes and she could feel more than the point.

“Don’t you dare try to scream, bitch,” he sneered. “I’d gut you faster than anyone can come and help you.”

Looking over his shoulder, she was just a little relieve to see Pari in the car looking a concerned, yet on high alert.

“I wouldn’t scream, Jesse,” she lied in a calm tone. “But if they come out of the back, they’ll get suspicious with you sticking a knife in my stomach.”

He looked down at the knife as if he had forgotten he was threatening her. Looking back up at her, he seemed reminded about what he was doing. “Get out in the parking lot,” he ordered grabbing her arm and nudging her to walk in front of him. “And if you try to move, I’ll shove this in your back.”

“I won’t,” she promised glad he allowed her to lead them out the Laundromat.

Pari looked at her and Jen deliberately looked terrified in her direction. The car was still running and Pari revved it just a little to let Jen know she was ready to go.

“How did you find me?” she asked Jesse in a light casual tone as if she were just passing the time.

“I’m a lucky ass bastard,” he said as if he’d just won an Olympic medal. “Saw you going in when I was coming out the store across the street. Do you know how long I been looking for you?” He grabbed her around the waist and pulled her body againt his.

She tried not to throw up from his touch. “Why? To hurt me like you usually do, Jesse?” She stayed still not resisting his touch.

He kissed her neck. “I never meant to hurt you, Jen. You’re my lucky girl. You’re my saving grace. You always make it work out.”

Jen indiscreetly reached down into her pocket and found some money. If Jesse was the old Jesse she knew, her trick would give her enough time to run to the car.

He was still running off at the mouth rubbing on the front of her body lewdly not caring that they were in public. “You’re going to stay with me, Jen.” There was a desperate tone in his voice. “And we’ll figure it out.”

“What about the people trying to kill you? The stuff you stole from that man.”

“When I tell him you’ll work for him, he’ll gladly stop trying to kill us.”

Jen was positive after that statement this was the old Jesse. He’d trade his own wife who he supposedly love to stop himself from being killed. If she were the old Jen she would have fallen for the malarkey, but now she wouldn’t stand for it. Her life was her own and her body would belong to only the man she wanted it to belong to. Not as a payment, not to save someone else’s life, not anything.

Dropping whatever bills that were in her pocket to the ground, Jen kept calm knowing her plan would work and just waited for the inevitable to work everything out.

“Where you been, love?” he questioned. “I looked everywhere for you?” His voice was on the edge of desperation. “You know you can’t leave me, Jen.” He reached around and pushed the ring on her finger. Her knuckle cracked when the ring was forced over the bone. She winced in pain. “You’ll always be my wife. I’m your first and I’ll always love-“ He stopped as his eyes caught the twenty dollar bills on the ground by their feet.

Without thought, he shoved her forward to pick it up and with the loose grip on her coat, she quickly snatched away and ran for the car. Pari was there waiting and revved the engine to go, but a flash to Jen’s right caught her eye and then the entire windshield on the vehicle shattered. Jen stopped running and just as she saw two more holes appearing in the front of the hood, Jesse attacked her to the ground to hold her down. Turning around under him to fight him off, she screamed for help. Jesse slapped her with the back of his hand.

Jen felt dizzy and it was getting hard to stop him as he continuously slapped her on each side of her face.

“You stupid bitch! You stupid, stupid bitch!” He paused for a moment to reach behind him to bring out his knife again and held it high to plunge into her chest.

“POLICE! FREEZE!” a deep voice bellowed. “Get off of her, Jesse!”

Jen was terror strickened, looking up at Jesse holding the knife ready to plunge into her. His eyes were wide in rage and he was almost salivating in fury.

Looking above her, she saw Salacious standing five feet away above her head pointing a gun at Jesse. Two sharp pops suddenly vibrated her body and looking back at Jesse, she saw blood running out of his mouth. She screamed in terror as he slowly fell to the side on his stomach. Squirming away wildly, she screamed again seeing the bullet holes in Jesse’s back.

Salacious jerked her behind him immediately and she saw that his gun had not been discharged at all and he was looking around confused. “Get behind me,” he ordered her.

She obeyed but looked in Pari’s direction. Her car was smoking, but she wasn’t in the car.

“Who’s there?!” Salacious ordered to nobody.

Jen frantically looked around and saw Pari behind a tree motioning for Jen to come over. Backing away slowly while Salacious was busy looking around and using his cell to call for police and ambulance, she hustled to the tree where Pari was.

Pari grabbed her hand and yanked her down a nearby alley. Looking back briefly, Jen saw a lean black dressed figure standing up on the roof of the Laundromat pointing a long rifle with a scope at Salacious as he knelt down to check on Jesse.

Salacious looked up at the roof and aimed his gun. “Put the gun down!”

Jen didn’t see any more after that. She could only pray the detective lived, right after she prayed that she lived from this horrible ordeal.

Green means currently writing – Blue means next up – Updated as of 01/19/2023
Go to mobile version
%d bloggers like this: